Friedrich Performance for the 718 Boxster GTS 4.0

As a two-seater roadster, as well as in the closed variant of the 718 series, the GTS 4.0 is undoubtedly an uncompromisingly sporty, but also handy vehicle. Porsche says of the 718 models - "They are built for a life in the midst of sport." They are mid-engine sports cars that combine the sporting spirit of the legendary Porsche 718 with the sports car of tomorrow and transfer it to the roads of this world. Translated with www.DeepL.com/Translator (free version)

The GTS models are now allowed to drive the same six-cylinder as in the Spyder and Cayman GT4. In terms of sound, the six-cylinder unfortunately lags a bit behind its predecessor, the four-cylinder.

In order to achieve a significant improvement in performance and sound here, Friedrich Performance Manufaktur has a selection of performance-enhancing modifications in its range with a rear silencer specially optimized for the 718 and a specially developed fan-shaped manifold to which a particulate filter replacement pipe with a 100- or 200-cell cat. connects.

Here you come again directly to the general TUNING SITE FOR PORSCHE VEHICLES.

The original tailpipes are installed on the new exhaust system, or can be selected from the Friedrich range in carbon or stainless steel as far as technically possible.

The specially developed fan manifolds replace the pre-cats, and are installed with or without Thermo-Integral insulation. OPF replacement pipes without cat. offer more power due to the omission of the particulate filter and should therefore only be used in racing. Of course, we also install the replacement pipes with 100 or 200 cells sport cats, also optionally with or without heat-resistant Thermo-Integral insulation. 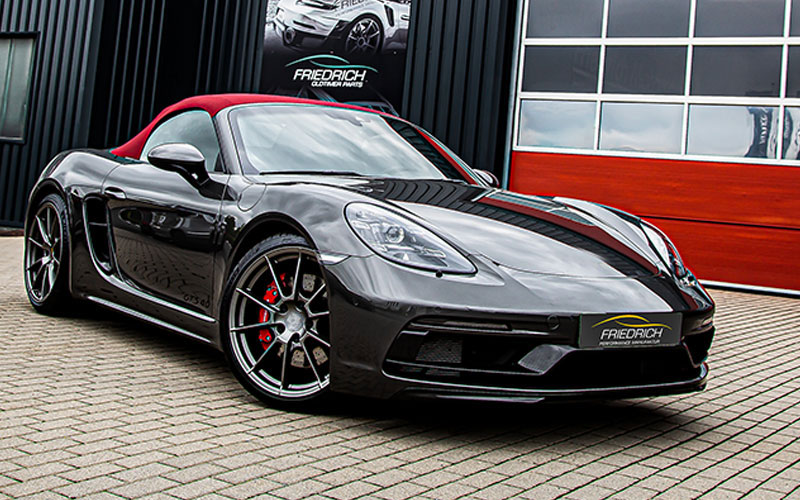